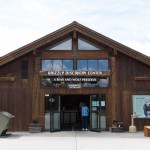 At the Grizzly & Wolf Discovery Center in West Yellowstone, visitors can observe captive bears exercising their keen sense of smell to uncover food hidden under rocks and logs. They’re really good at it . . . they go right to that food. Then again, the food is under the same rocks and logs every time, so there may be a bit of a conditioned response at work also.

To get out of their preserve area and amongst people, a bear would first have to get past some very heavy cable fencing. If he managed that, he’d have to clear a pretty wide, 20-foot-deep chasm. Then there’s another fence. 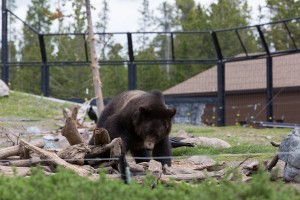 I think the whole thing is electrified. The point is that although you get closer to these bears than you normally do in other non-certain-death situations, they are still far enough away that the avid photographer still wishes he could get closer. This picture was shot at 200mm. Not good enough. I want to zoom in for a bear head shot, and get rid of all that fencing and what-not. 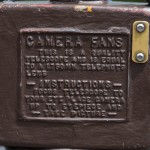 Voila, the Grizzly & Wolf Discovery Center is on it! They have about three pay-telescopes lined up. Drop in a quarter, and zoom right in on these magnificent creatures. And on the side, there’s a note to photographers:

For only 25 cents, I had to try it. I used my Canon S95, because of the obvious impossibility of using any of my EF lenses . . . 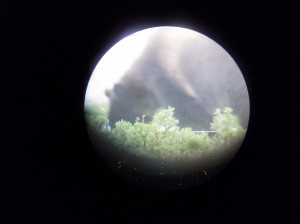 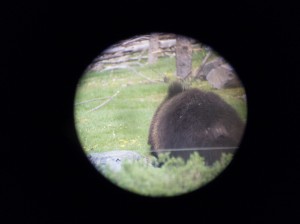 Better! But, and I hate to whine . . . that don’t look like 1750mm to this camera fan. Maybe I could maximize the awesomeness by zooming in on the camera itself: 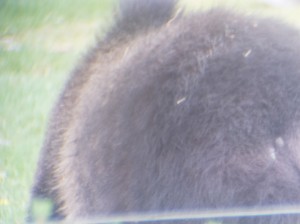 As they say, third time’s a charm. I don’t want to brag, but this is SOOC. Yeah. I’m offering this fine image in a limited, signed edition of only 3,000 prints. Contact me for pricing. Act now, before it’s too late.

So even if the telescopes weren’t so great for photography, they were good for a joke. Or two. “Hey, is that a pay telescope between your legs, or are you just really excited to see those bears?” 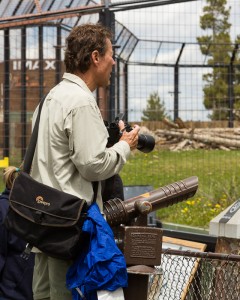