Someone asked how this picture was assembled, so here’s a behind-the-scenes look.

To get detail in every part of the scene, multiple exposures are required. I used three:
—sky and daylight areas
—the dark areas under the lip
—transitional areas between the two extremes

I shot the daylight areas first: 11 frames shot with a 50mm lens. With the 50, I shift horizontally 25º between each frame in a given row, and 20º vertically between each row. This leaves about 35% of overlap between frames, making it easy for PTGui to find control points. One could pivot as much as 37.5º horizontally and still retain a tiny overlap area, but the program gets confused when dealing with such a small overlap area, and in many cases one wants the extra area because there may be few distinguishing features to identify as control points (e.g., in ceilings of buildings, where sprinkler heads, recessed lighting fixtures, etc., may not be grouped very closely together). So approx. 1/3 overlap seems a good rule of thumb to me.

Here’s the sky area stitched together. There’s a lot of black at the top because, given my starting point on the bottom and my strict 20º vertical shifts, I ended a row with a tiny sliver of sky not accounted for . . . and had to add an extra row on top.

Next step was to cover the whole area with my “baseline” exposure: 8 wide by 5 high, or 40 images total. 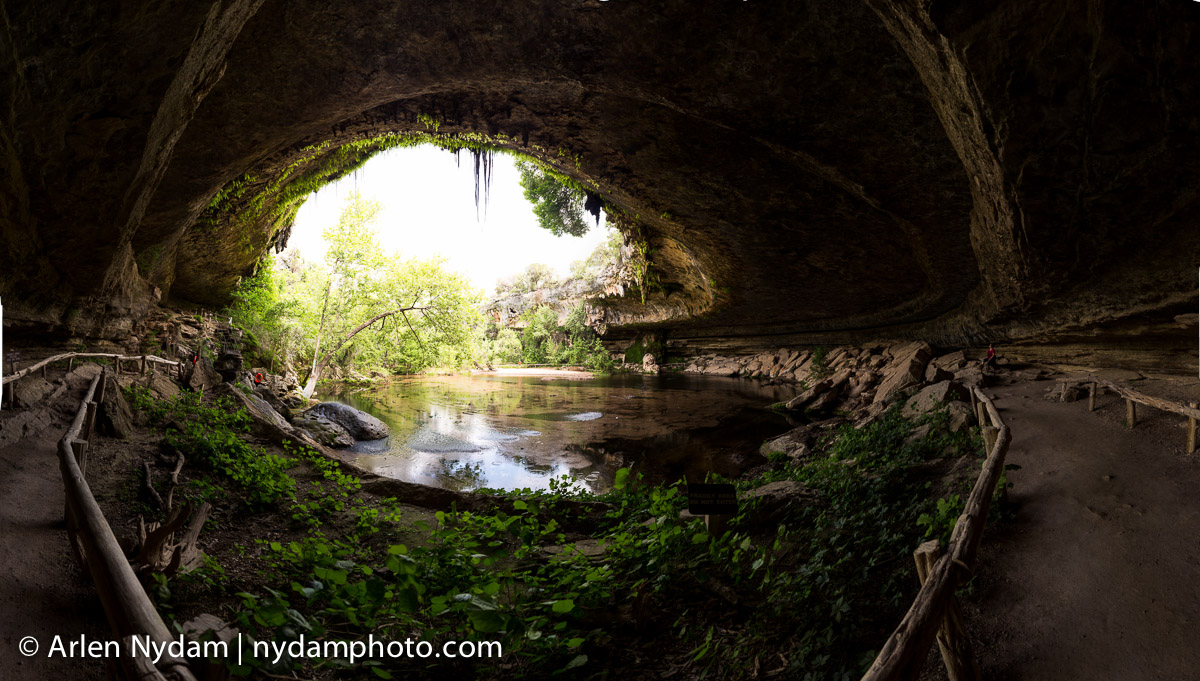 The final step was to shoot the darkest areas a little brighter. For this step, I could skip the bright areas of the scene altogether. In my very early panoramas, ca. 2009, I would shoot entire scenes with three exposures and 66% overlap, which led to a lot of superfluous frames. I’ve slowly become more economical in my technique. As you can see below, I didn’t save a lot of frames by omitting the sky . . . but I did save a few. (Four, to be exact.) 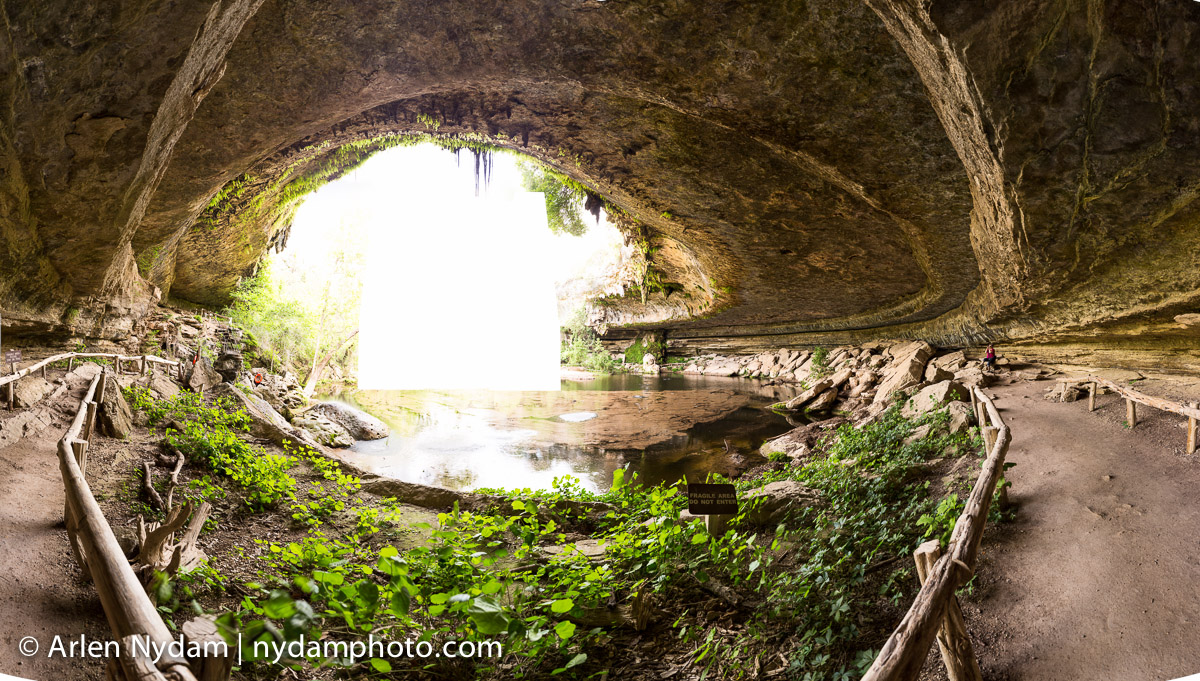 Then the three layers have to be blended in Photoshop. I dislike the look produced by HDR programs like Photomatix and others, for the most part. I prefer the “natural” look that comes from painting in the layer masks by hand. 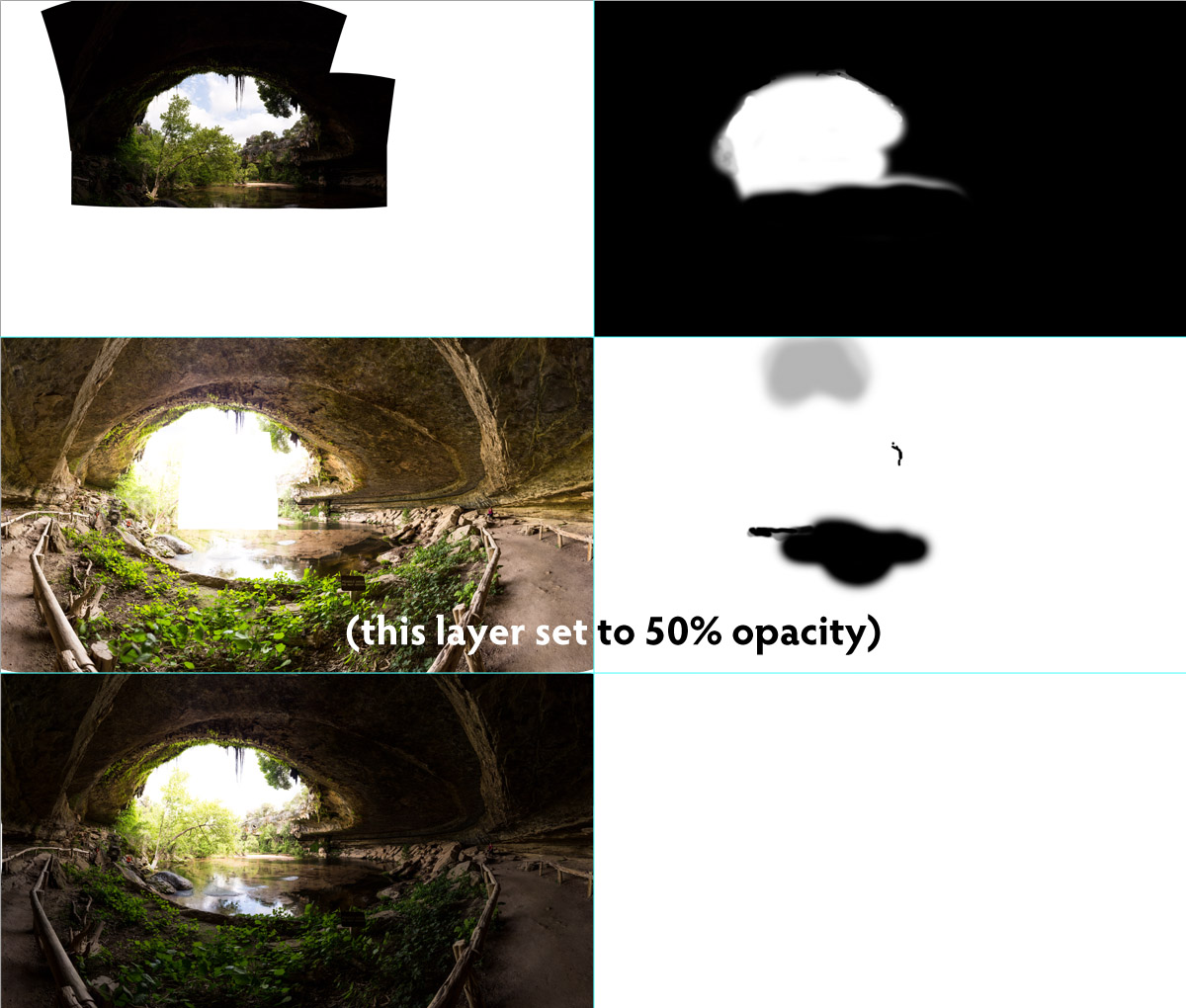 The middle layer mask has a little grey area painted in to compensate for the bright area that showed up in that exposure. Not sure if that’s part of the coloration of the rock, or if it’s a photographic artifact . . . but I didn’t like it. I also fixed the bottom corners in the final version.