These were taken with my pocket camera, full auto settings, and are not meant to be beautiful or artistic. I like them for different reasons.

At Gibbon Falls in Yellowstone, on a day of uninspiring weather and sky: 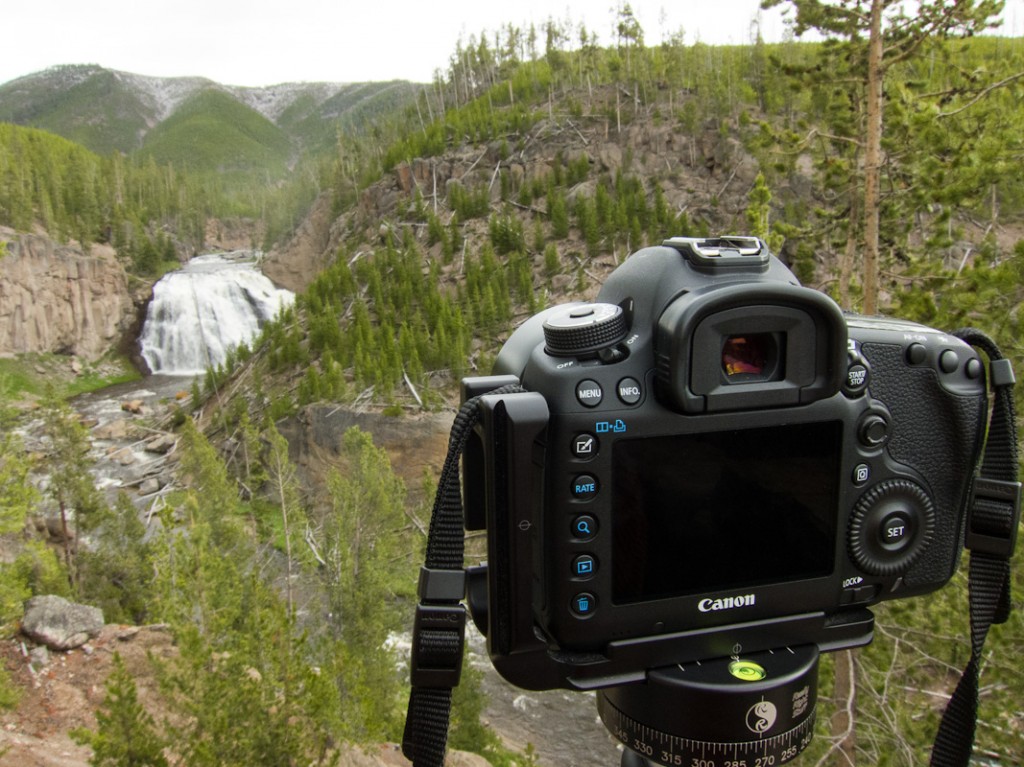 I shot with all three tripod legs on the ground for several years before I realized that in low wall situations, I could mount one or two legs on the wall, and get a few inches closer to the subject. For single frames that doesn’t make any difference, but when trying to make a panorama from behind a wall, it helps keep the wall out of the bottom corner(s) of the pano. As you can see from the picture, I wasn’t doing a panorama here: the light seemed too boring to invest the extra time. Seen at bottom is the original 5D, which I kept a 20mm on for the whole trip: 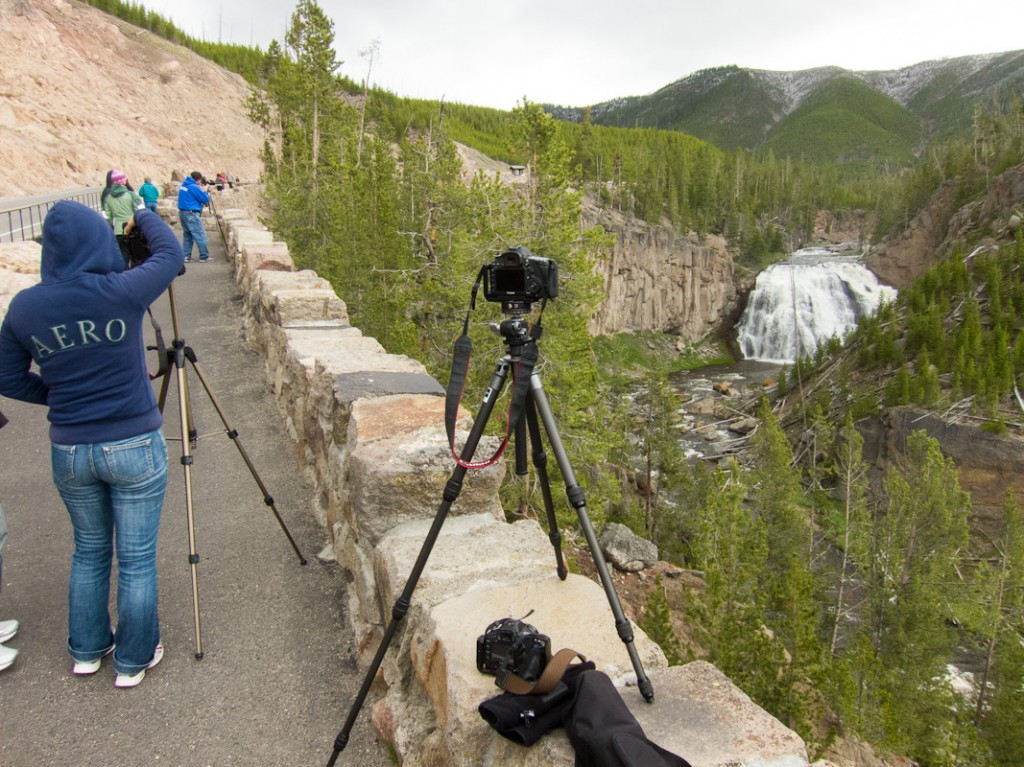 Overlooking the Grand Canyon of the Yellowstone. My original 5D hangs from the lens of the new model, for no good reason other than I wanted them both in the pic. That’s my cousin’s folded-up tripod, with pistol-grip head. That’s not for me . . . I love my Really Right Stuff stuff. Wouldn’t trade their ball head for anything. 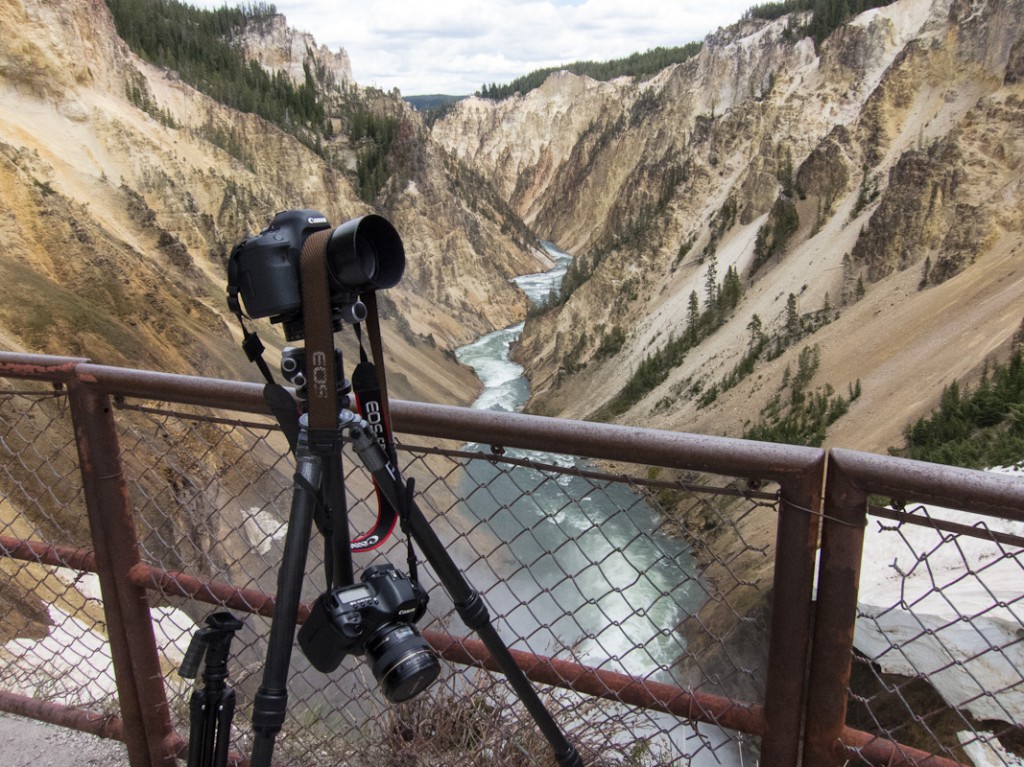 When the railing is chest-high like this, I put two tripod legs flush with the fence, and bring the third leg up behind to keep it in place. Then I straddle that third leg and put my feet behind the front two legs to make sure the thing doesn’t go anywhere. This setup helps minimize the occurrence of rail in the panorama. If you click here you can see some rail at the bottom left. I keep the strap around my neck—I trust my tripod and ball head, but why take a risk seeing your rig disappear into the thundering mist?

This next one is at the Lewis Valley. I was sleeping in the van when my cousin’s wife pulled over. I woke up and saw the cool view, so had to make use of it. This pic reminds me that I need to replace that goofy Canon-issued strap with something with no red on it: 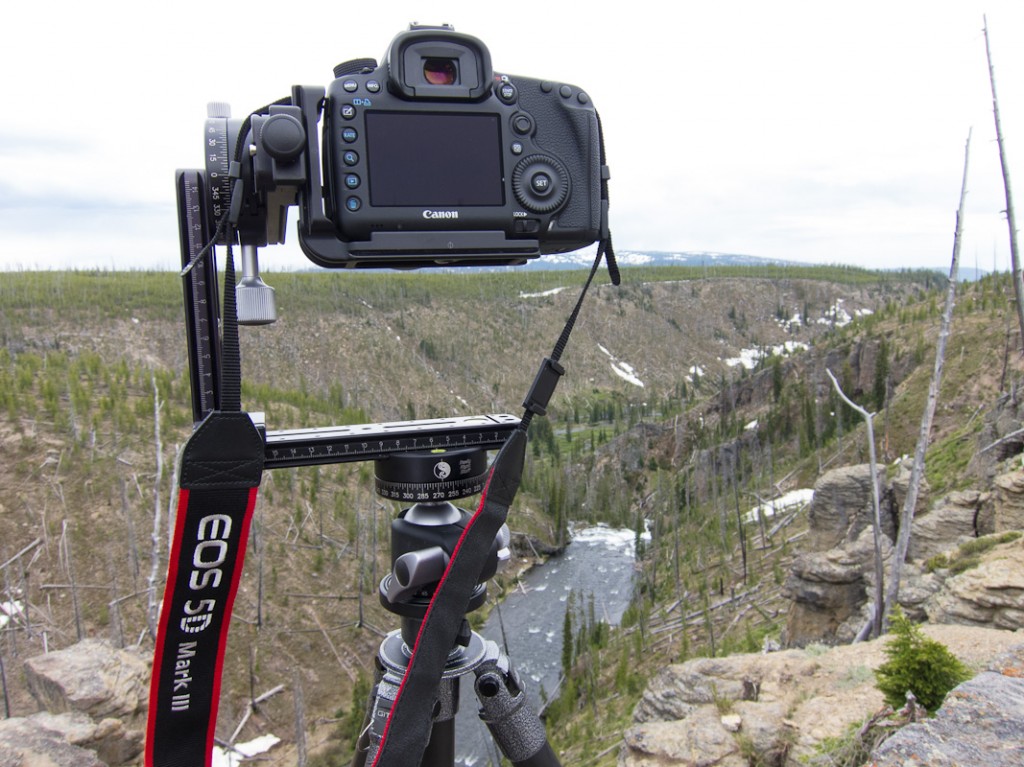 This is a crop of the final panorama from Lewis Valley. The full panorama looked ridiculous. Just did not work at all. Probably could have gotten the same final shot without resorting to panoramics, but oh well.

Next, overlooking the Snake River Gorge, Twin Falls, Idaho. This is from my aunt and uncle’s back porch. 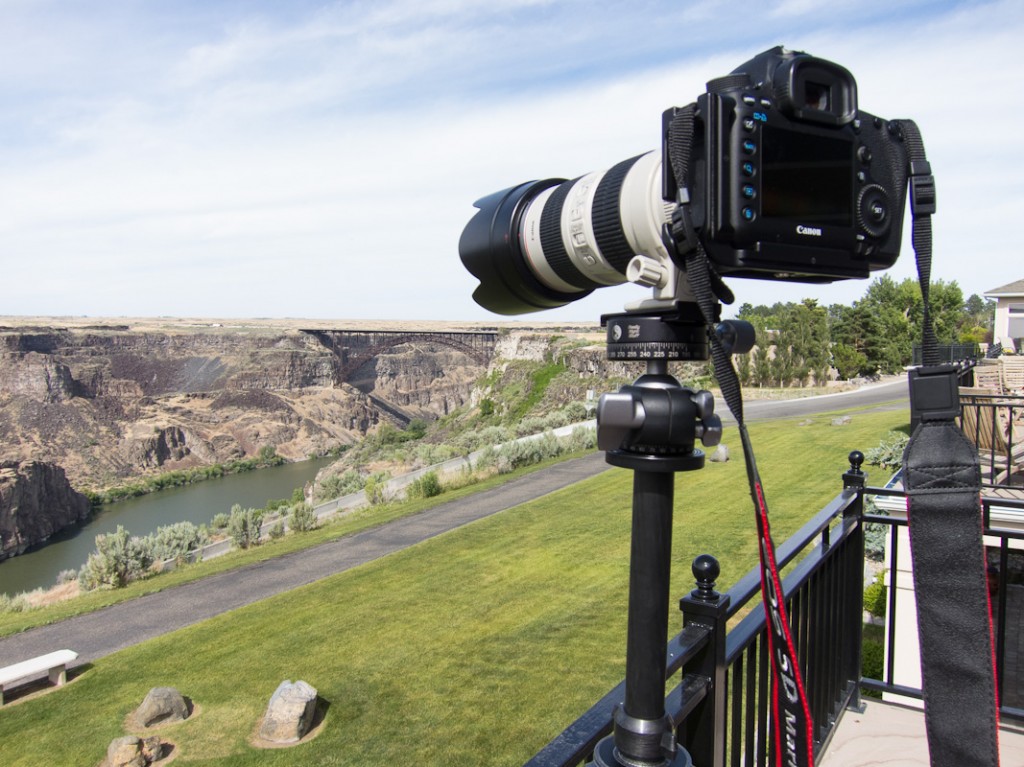 No panoramics for this one, either. I tried that earlier and it, too, looked ridiculous. Nobody wants to see a 120º view of the Snake River bent like a bow about to break . . . and with patio railing along the bottom. So I’m keeping that one in pectore, if you will. Three base-jumpers leapt from the bridge while we were out on the patio. 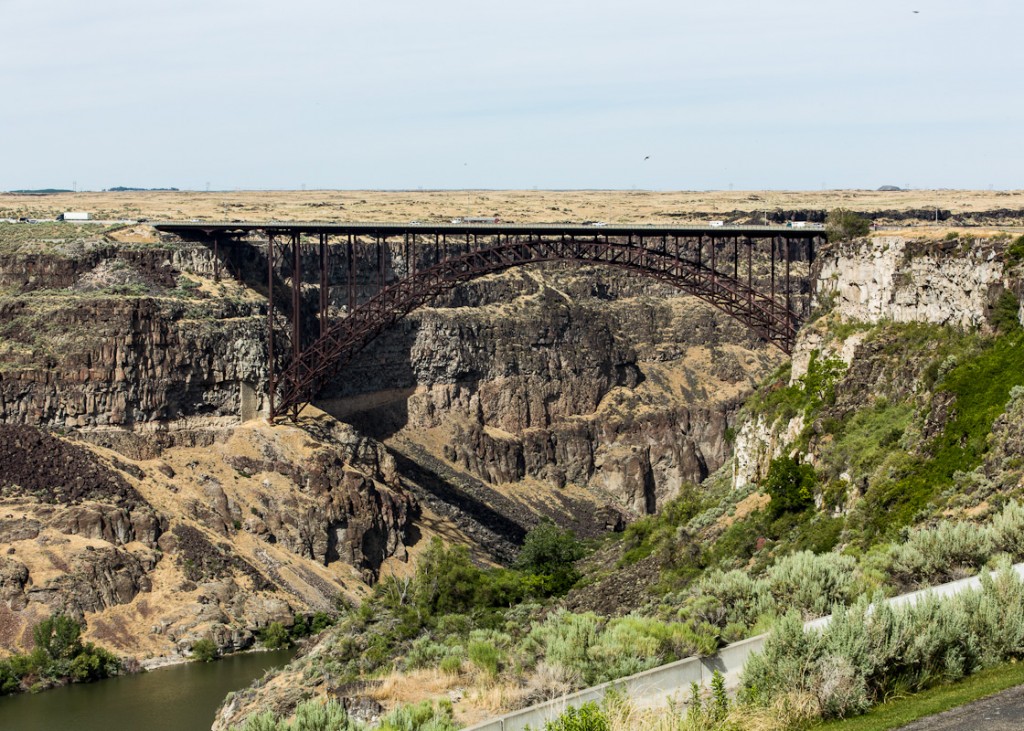 This last is probably my favorite “gear pic” from this trip: Horsetail Falls, Oregon. A stone’s throw east of Multnomah Falls, which is a short drive east of Portland. 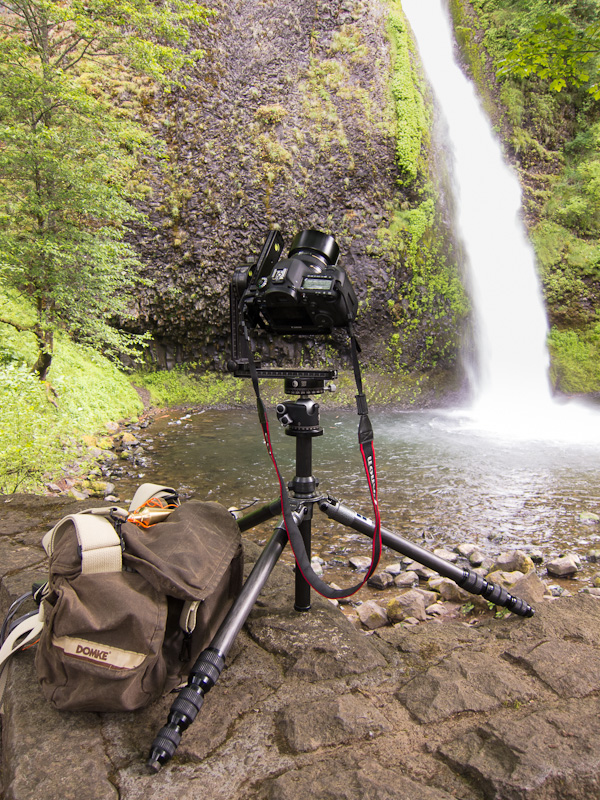 Shooting from this position at this time on this day was a hassle and produced questionable results. The clouds kept shifting, and tourists kept walking around down by the falls. The final product took 73 frames (i.e., a problematic 5W x 6H panorama), about half of which were exposed for the sunlit falls, and half for the foreground trees, which were in deep shadow. A few frames were of me holding the plumb line with orange string, seen resting on my camera bag in the above shot. Additional frames tried to capture various parts of the foreground without people in them. An attempt at subtlety in layering in Photoshop brought me to the scene below. I’ll have to try something different next time I visit . . . 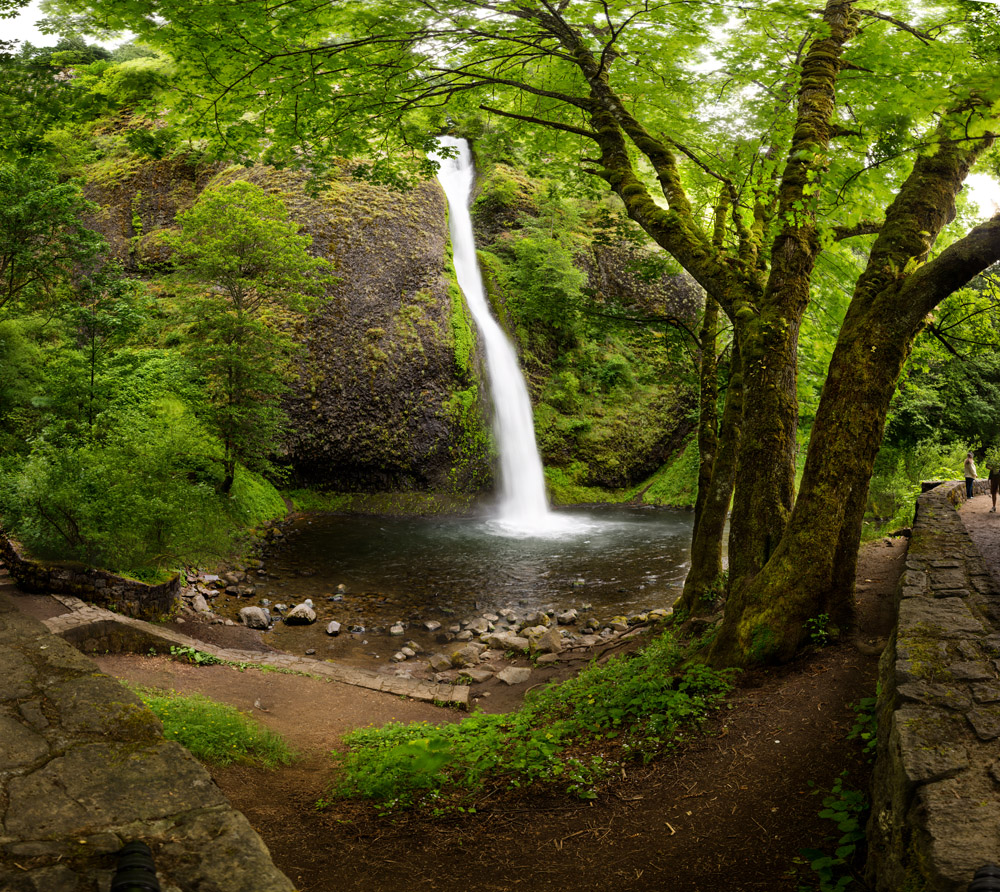