Over at Luminous Landscape, photographer Enrico Cinalli has published a very interesting look at how he’s producing landscape panoramas of his native Tuscany.

In short, he’s rigged his SUV with a pneumatic pole that telescopes out to 33 feet high. At the top, a mechanized panoramic head. A tablet computer connected via USB controls the whole business, using a script that he developed himself. Pretty awesome.

This is great for a couple of reasons:

1) Height imparts a special look to landscape photos. 33 feet is pretty high up. 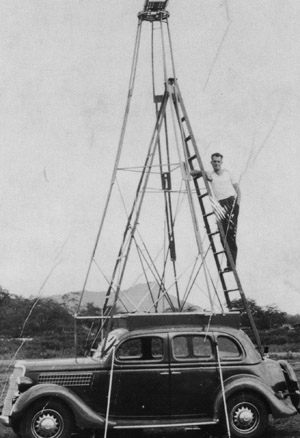 2) Having mechanized the entire thing, Cinalli doesn’t have to risk his own skin by climbing up a huge ladder. E. O. Goldbeck (1892-1986), a photographer from San Antonio who was famous for his panoramas (e.g., of groupings of military personnel), was apparently completely fearless. For the big “insignia” panoramas (the troops would be dressed and arranged so that they would form their group’s insignia), which took days to plan and hours to execute, he would build a small tower from which to shoot the photo. But for other stuff—impromptu landscape panoramas, I guess (that circular platform at the very top is the base for his panoramic camera)—he had a tall ladder attached to his car. I think he must have gone through multiple versions of this ladder: I remember seeing a photo in a book on Goldbeck, in the reading room at the Harry Ransom Center (which owns Goldbeck’s archives as well), that showed a different car-mount setup. And in this other picture he was standing on the top step of this crazy ladder.

I can only imagine that Goldbeck’s car-mount ladder must have been incredibly shaky . . . it’s a testimony to his skill that he was able to make it work at all. I once tried putting PVC pipe on the ends of my tripod legs, which bought me an additional 2 feet of height. But it would wobble if anyone walked past. Okay for shooting alone and indoors, but bad for everything else. Cinnali explains that he deals with wind and wobble by keeping his shutter times very short. I had to do that on the boardwalks in Yellowstone, or give up the idea of panoramas of Mammoth Hot Springs.

In many cases, one doesn’t need to be as high as Goldbeck or Cinalli to get a great image, but my hat is off to both of them for literally taking it to the next level.