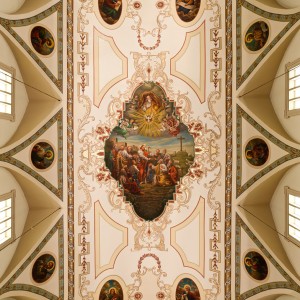 I’m not yet proud enough to suppress an image (or, at least this image) for such an imperfection. Like the medieval craftsman, I’m happy to have those imperfections as mementos of my own imperfections and of the inferiority of all art to the creations of the supreme Creator. Then there’s the practical difficulty . . . I can’t just pop back over to New Orleans to try again . . .

It’s also not the easiest thing in the world to shoot straight up and get it right, without the benefits of Live View or an articulating display screen. (My vintage 2005 DSLR’s lack of these amenities makes one more thing I have in common with the medievals—their DSLRs didn’t have them, either.) But even with these things, it’s hard to figure out with mathematical precision exactly when you’re standing in the center of what you want to shoot. One end usually becomes the “short end.”

This was shot with a 50mm lens. Here’s a full-sized detail of God the Father with some angelic children’s heads: 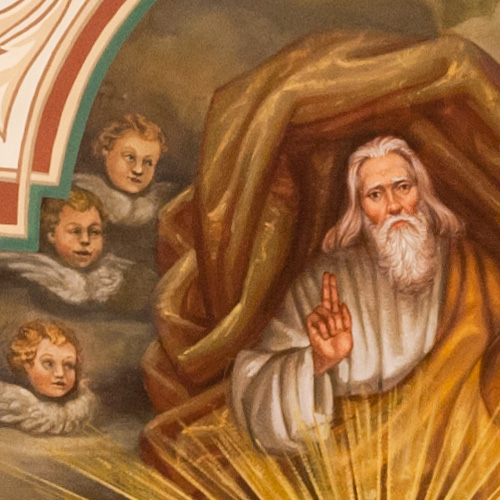 But for all this picture’s imperfections, I can at least console myself that it’s better than the ceiling postcard on sale in the St. Louis Cathedral gift shop. Because there isn’t one on sale there! The oldest continuously used cathedral in North America, and they offer only four postcards: exterior view of facade, interior shots of the altar and organ (i.e., front and back), and one stained glass window. Nice shots, and I bought three of them. But this ceiling is something special.