Second-oldest neighborhood in New Orleans, after the French Quarter. Founded 1719. Home (as the billboard announces) of Mardi Gras World! MGW’s billboard could use a facelift.

These photos were taken around 7:30 a.m., facing roughly east-southeast, putting the sun in my eyes and the signs in shadow. So I took three shots, hoping one would be usable by itself. 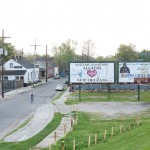 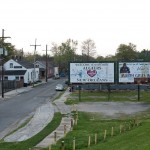 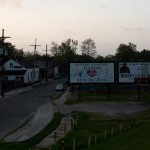 Thankfully, I noted that the wind was not blowing, and the distant trees were essentially unmoved from shot to shot (moving trees create problems for layering exposures because the dark/light areas between the shots don’t line up right). So I lifted the biker out of frame #1, the billboards from frame #2, and the sky from frame #3, using an adjusted version of frame #3 as the layer mask for the sky. (And of course adjusted the White Balance on everything as well.) Then I cloned out the small triangle of boardwalk in the lower right corner, and cropped to 16×9. For the moment, I’m happy with the result. Sometimes I think the sky might be a little overbaked, but seriously, who wants reality? Not even Dan Rather wants reality. 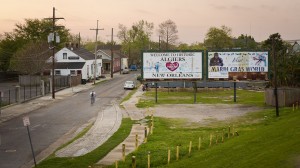