There is no place on earth like Yellowstone National Park, and I had never been there until my trip last month. Best to start with a photo. 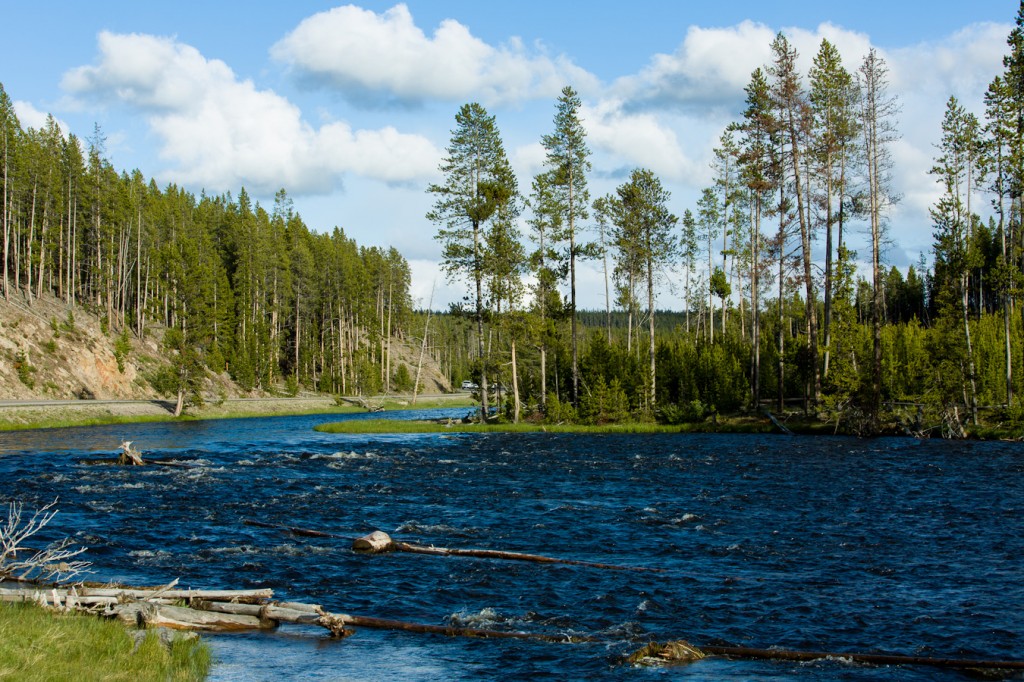 This is the Madison River, pretty close to the west entrance, and was our first stopping point upon our first entry into the park. Yellowstone’s streams and rivers, in many places, appear wonderfully blue. They exude purity—or the idea of purity, for visitors are warned not to drink the water. It will make you sick and reportedly can kill small pets if they swallow too much of it. Here’s another killer stream: 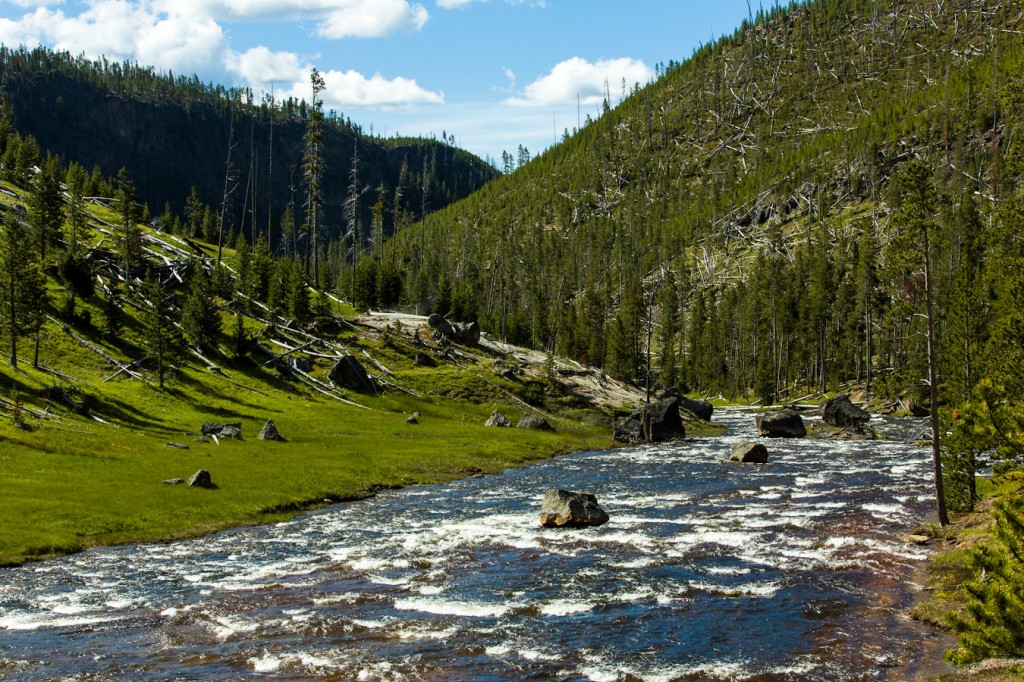 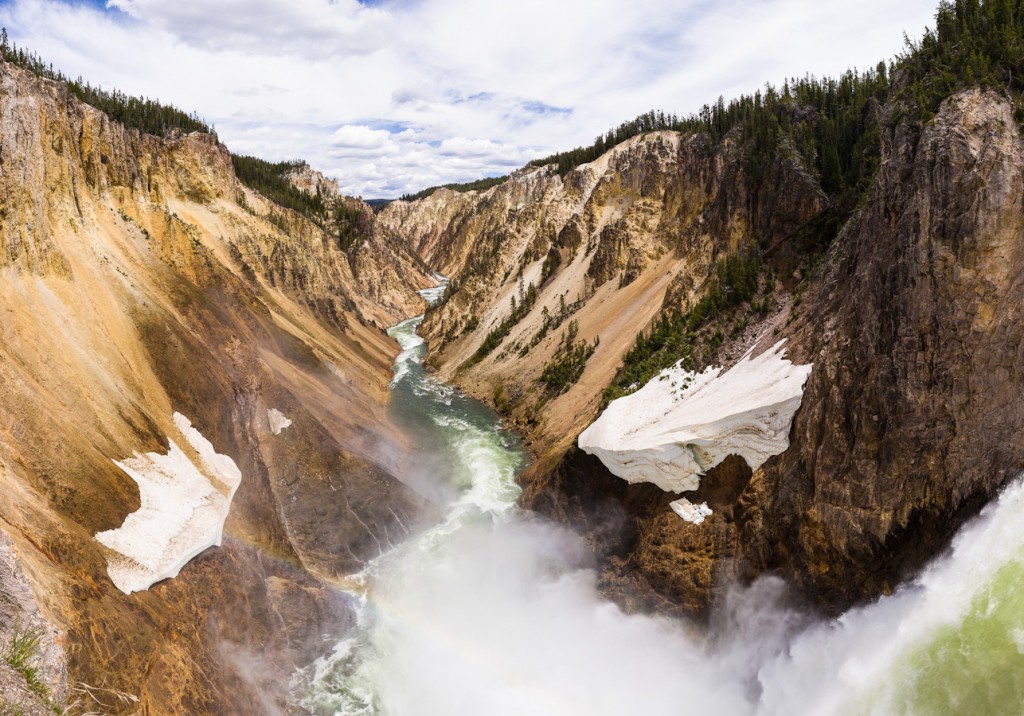 This scene is pretty majestic in person—one shot can’t convey the wonder—so I decided to try to do it better justice by applying a panoramic treatment. The picture here is a 20-image panorama, 5 shots across by 4 rows high. God gave me indifferent clouds and sunlight for this image, and I didn’t want to wait around all day in case it changed (trying to strike a balance between photographic patience, and my desire to cover ground on this my first visit). In fact, this was the third panorama I attempted, the first two having been rendered less powerful by the presence of a lot heavier cloud cover. But having been there, and seen the place in person, I am not too unhappy with how the panorama turned out. 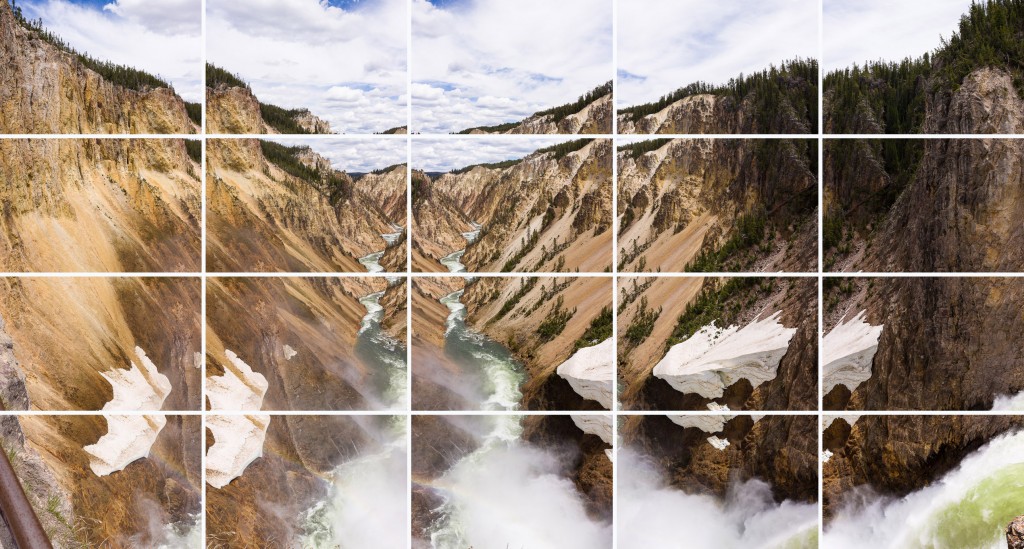 And a close-up of the detritus on top of the snow on the right bank: 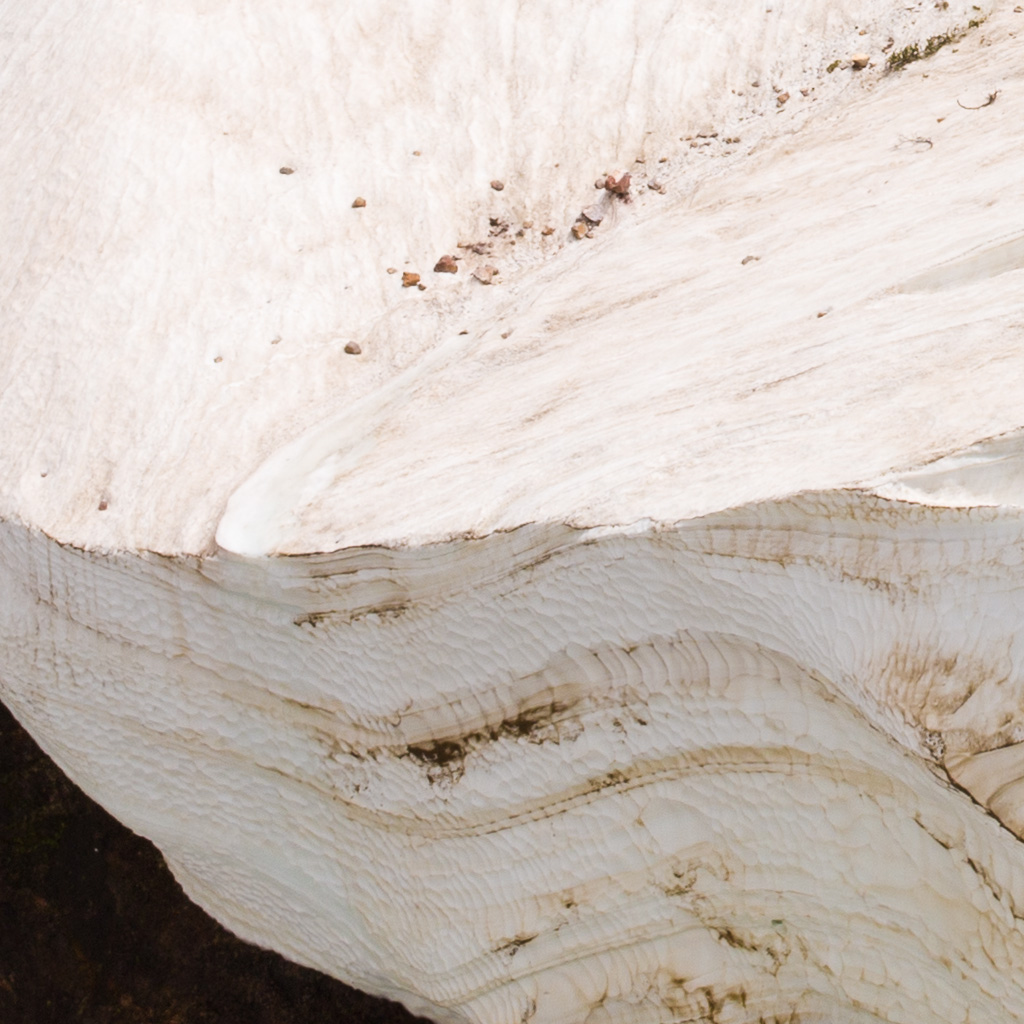 Now I need a big printer.

The falls just visible in the panorama look like this from the other side: 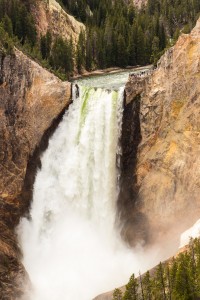 The viewing platform goes right to the very edge of the rock. Kind of stirs up the butterflies to think about it when you’re standing there—putting your trust in a slab of concrete resting on the rock. Then a few stops down the trail you read that a certain viewing platform used to extend 100 feet farther into the canyon, until a 1970s earthquake sent it tumbling into the canyon . . . but if I had to choose between getting gutted by a bear, taking a dive in an airplane, sinking with a ship, being buried alive, being shot in the back, or falling over the Lower Falls, I think I would choose the waterfall plunge. Maybe like the Jesuit at the beginning of The Mission.

More of the falls: 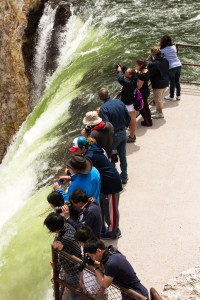 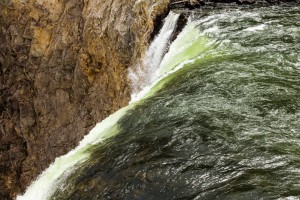 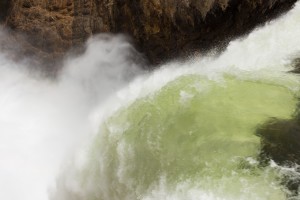 We saw a fair number of animals. Here are a few of them. 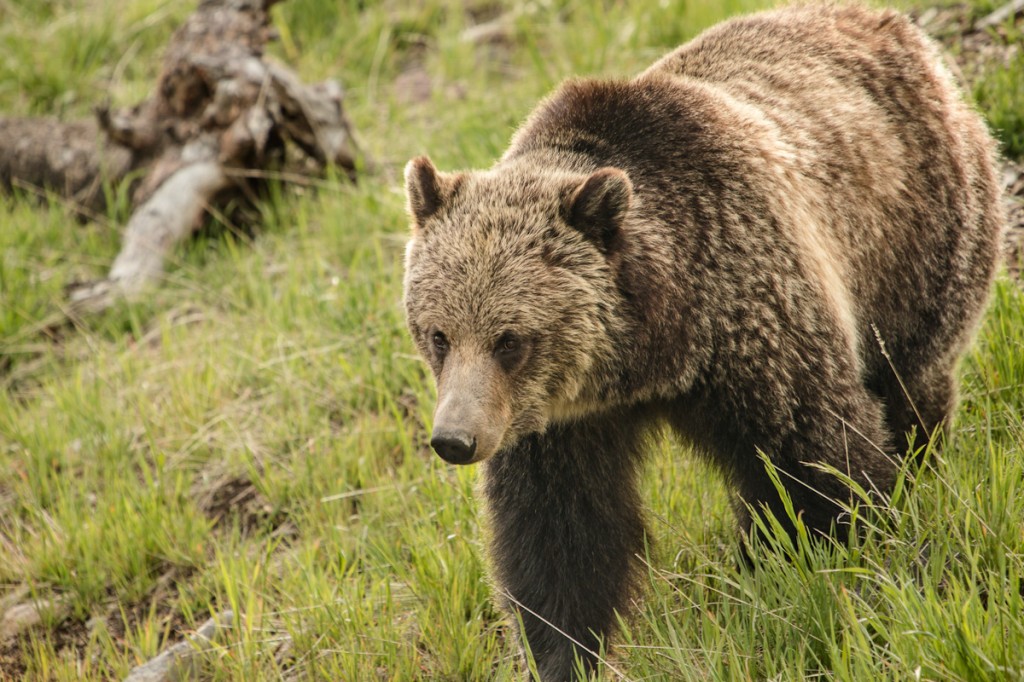 This bear was foraging around the road, and walked in front of our van. My cousin was driving, so I got out and shot across the hood from the driver’s side. This was the best of the 17 or so pictures I took. 70-200mm at 200mm, with 2x extender. Not sure how far away the bear was at this point (30 feet?), but right after this shot I hopped back in the van—got too close for comfort. Undoubtedly the high-adrenaline point as far as animals were concerned. 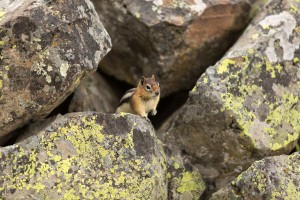 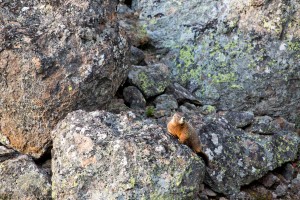 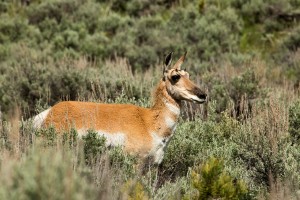 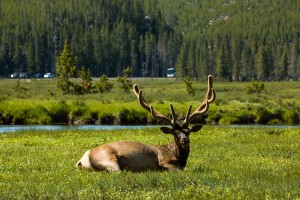 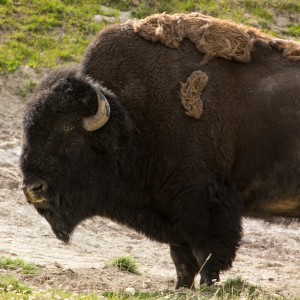 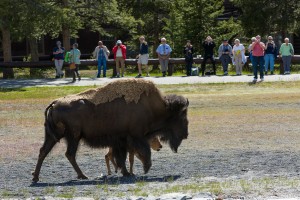 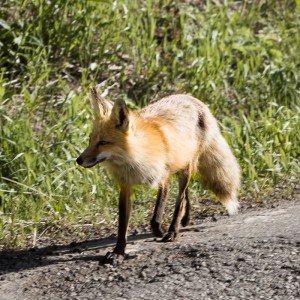 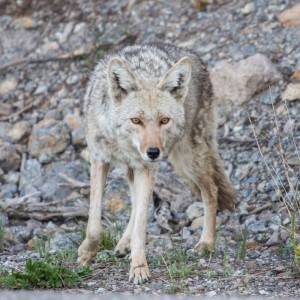 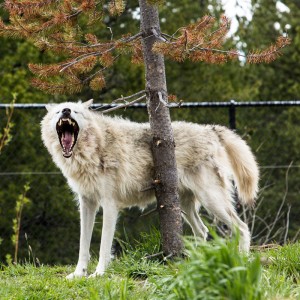 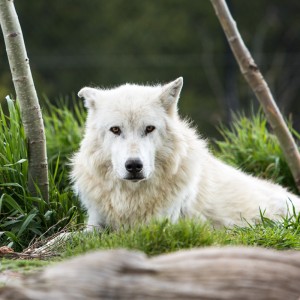 All the animals were photographed in the wild, except for the wolves. Those live in the town of West Yellowstone, at the Grizzly & Wolf Discovery Center. The chain link fence behind them kind of gives it away. They do a lot of sleeping. The one wolf is yawning. In the wild, wolves are the top predator. In the wolf preserve, their food is killed for them, which no doubt has left their hunting skills a bit dulled. Even so, I am glad I was shooting these pictures through a picture window in a viewing room.

One more of the Grand Canyon of the Yellowstone: 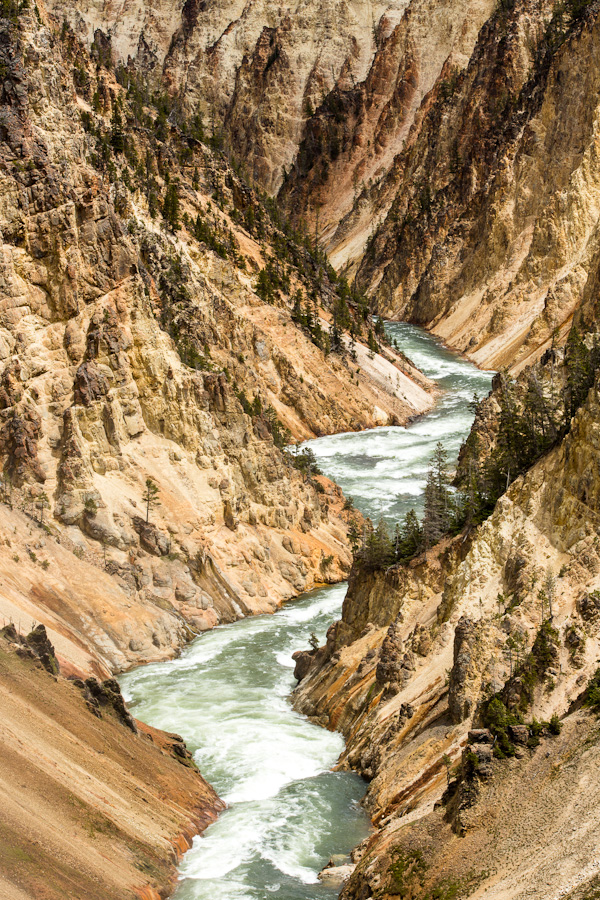 Mammoth Hot Springs is a fascinating area. Hot springs pumping water and two tons of calcium carbonate every day, left running for hundreds or thousands of years, will create one bizarre-looking landscape. Seen from afar:

One of the hills up close: 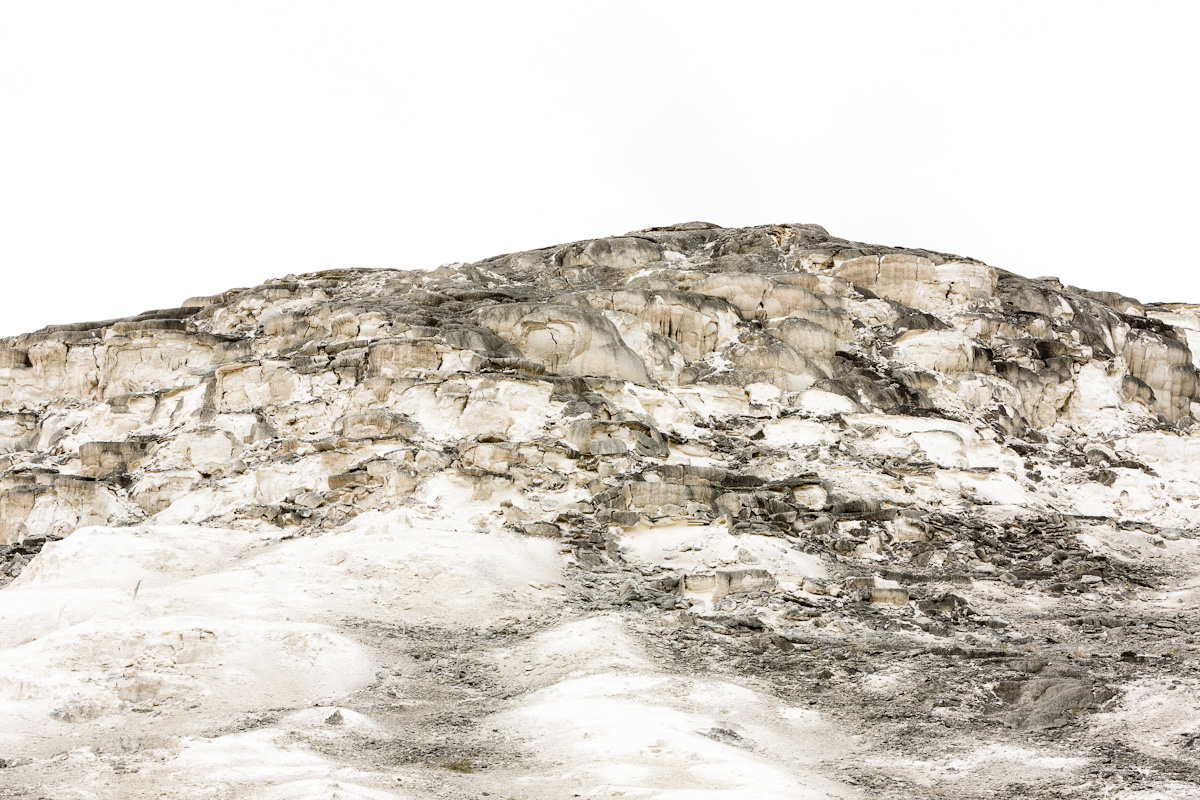 With spring activity, which produces orange algae/bacteria growth (another panorama): 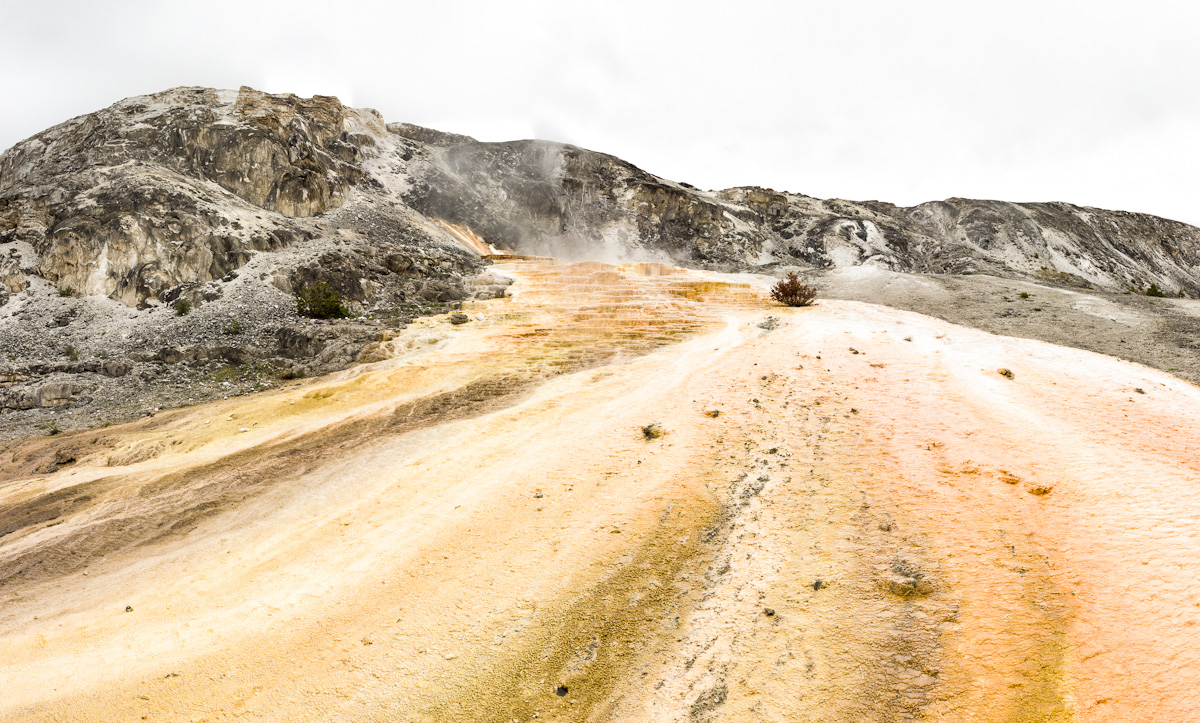 A note on tripods in Yellowstone: they are indispensible, if you want to steady your long lens for sharper wildlife shots. They come in handy in lots of other places, too. But trying to use a tripod on the boardwalks, such as criss-cross the hillsides in Mammoth Hot Springs, or provide pathways through areas like the Grand Prismatic Spring, is an exercise in futility if there are other people around. Every step jostles the entire boardwalk. And going in the second week of June, as I did, one finds oneself surrounded by hordes of fellow tourists. The boardwalks are fairly narrow, which prevents the full spreading of the tripod legs. Nevertheless, the shot immediately above would not have been possible (for little ol’ me, anyway) with a single frame, and I minimized the ill-effects of vibrations from the constant foot-traffic by upping the ISO to 400 so I could keep my shutter speed at 1/160th (at f/16). 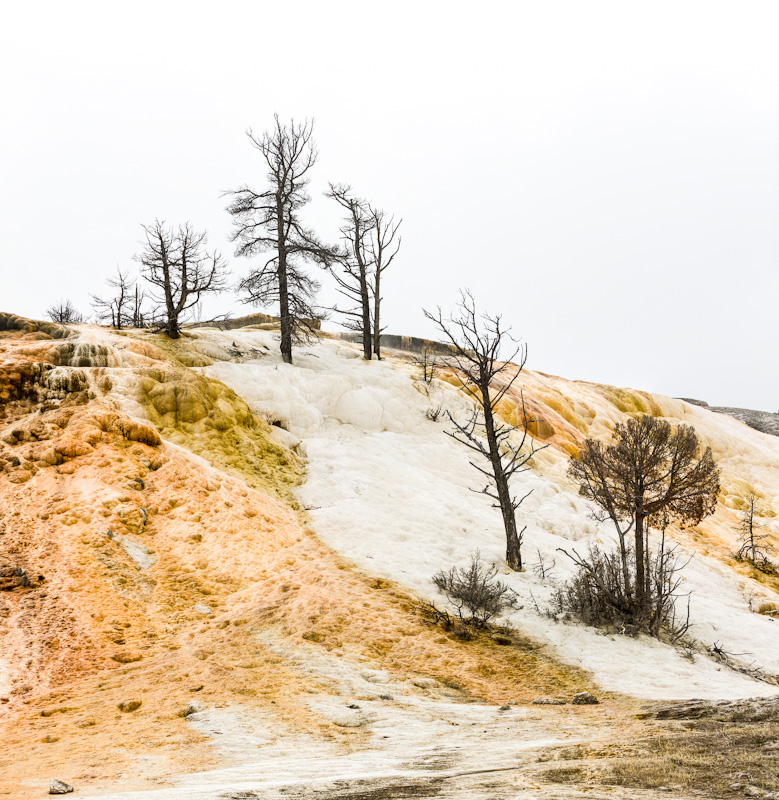 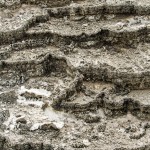 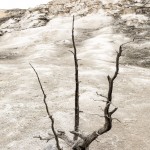 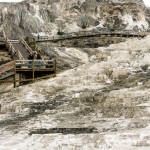 What’s more interesting even than this desolate landscape itself, is the fact of its situation amidst some really beautiful green hills. If you stand in the place where the last two photos were taken, and turn around, you see this: 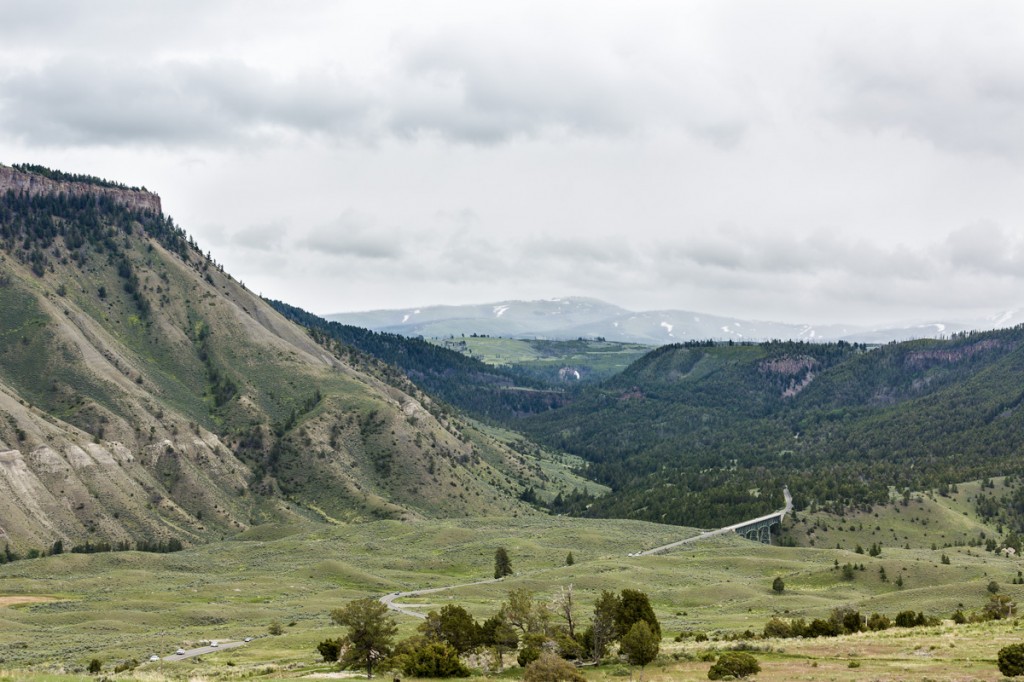